TWO IN A BOWL 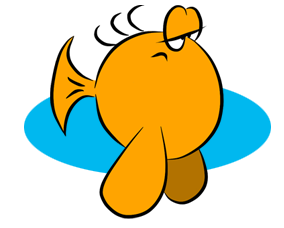 The almost perpetual pessimist in the duo who takes life seemingly with stoic calm, and who most often looks with a very skeptical slant at what his partner does. This pessimist doesn't go out of his way to hand out the occasional quirky comment every now and then. 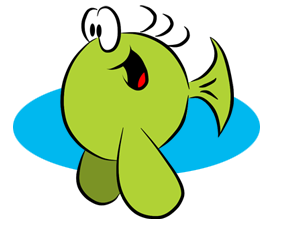 This guy is by no means the sharpest knife in the drawer. He is happy to make "waves" every now and then that can have a direct or indirect impact on the other. Mostly happy and satisfied and is the eternal optimist... especially when it comes to escape plans.

«Two in a Bowl» is a single panel comic about two small fish, one green and one orange, living in a rather limited universe – a goldfish bowl. Despite the limited space, anything can happen as these two happily go about their daily business.

Despite the fact that they now and then ends up in situations that gets them out of the bowl, they always find their way back to their familiar surroundings, where life takes its course with philosophical reflections, a little squabble now and then, and the occasional hatching of a new escape plan.

Part of the concept of the series comes from the idea of putting two opposites together, a bit like Laurel and Hardy or Abbott and Costello. In such combos one is often a little foolish and this foolishness can sometimes have an impact on the other.